THE ELGIN MARBLES: NATIONAL TREASURES OR ILL-GOTTEN GAINS? - PART ONE 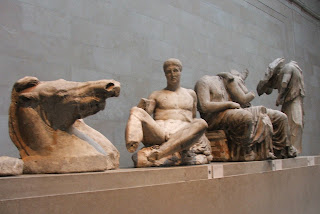 THE ELGIN MARBLES: NATIONAL TREASURES OR ILL-GOTTEN GAINS?   PART ONE: THE ELGIN MARBLES BEFORE LORD ELGIN This article is an extended version of a talk I gave on 1 September 2021 at the Atkinson Museum , Southport , as part of their Ancient Worlds lecture series The idea for this article (and the talk on which it was originally based) developed out of the work on Greek architectural sculpture which I used to do with my A-level Classical Civilisation students.   Every year we would spend weeks studying the sculptures from the Parthenon and other buildings on the Athenian Acropolis (the so-called ‘Elgin Marbles’), culminating in a visit to see these sculptures in the British Museum .   This inevitably drew us into the question of how these sculptures had ended up in the British Museum , and whether they should stay there or be returned to Greece . East pediment of the Parthenon (Photo Credit: Trustees of the British Museum) The debate over the Elgin Marbles is very emotive
Post a Comment
Read more

THE GERMANS GOT THERE FIRST: DONALD TRUMP & THE AMERICAN VALHALLA 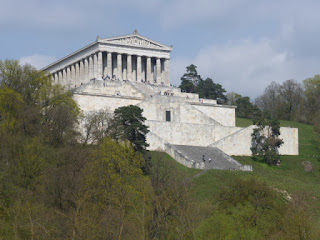 THE GERMANS GOT THERE FIRST: DONALD TRUMP AND THE AMERICAN VALHALLA   One of Donald Trump’s last actions as President, on Monday 18 January 2021 (his penultimate full day in office) was to announce plans for a ‘National Garden of American Heroes’.   To use his own words, the plan is to create “a vast outdoor park that will feature the statues of the greatest Americans to ever live”, reflecting “the awesome splendour of our country’s timeless exceptionalism” (I’m pretty convinced he wrote the speech himself, including the split infinitive).   Although many aspects of the project are vague – the location has not been decided yet, and it’s unclear where the funding would come from such a large enterprise – the idea is to create a sculpture park featuring 244 statues of American worthies (all deceased, so Kobe Bryant and Whitney make the list, but not Michael Jordan or Beyoncé). Trump’s list is, to put it mildly, a mixed bag, ranging from semi-mythical frontiersmen (Daniel Boone, D
1 comment
Read more

A MEDUSA FOR MANHATTAN: LUCIANO GARBATI'S 'MEDUSA WITH THE HEAD OF PERSEUS' 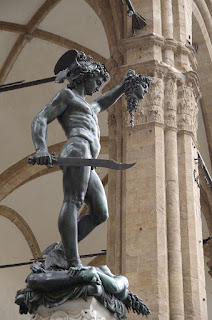 A MEDUSA FOR MANHATTAN :  STATUE OF THE MONTH, NOVEMBER 2020 As the bizarre and frustrating year that has been 2020 draws to a close, I’d like to consider one of the more positive aspects of this year’s events: a renewed interest in public sculpture.   One of the most memorable pieces of news footage this year was the toppling of the bronze statue of slave-trader Edward Colston in Bristol .   Suddenly public sculpture stopped being invisible street furniture and became a topic for discussion, particularly in terms of the purpose of such sculpture: who should we (and shouldn’t we) be commemorating in this way, and what form should such memorials take?       One of the most controversial sculptures to be erected this year (although the original resin version of the statue actually goes back to 2008) is Medusa with the Head of Perseus , a bronze sculpture by the Argentinian sculptor Luciano Garbati depicting a beautiful, naked Medusa holding a sword and the head of Perseus (modelled
Post a Comment
Read more
More posts